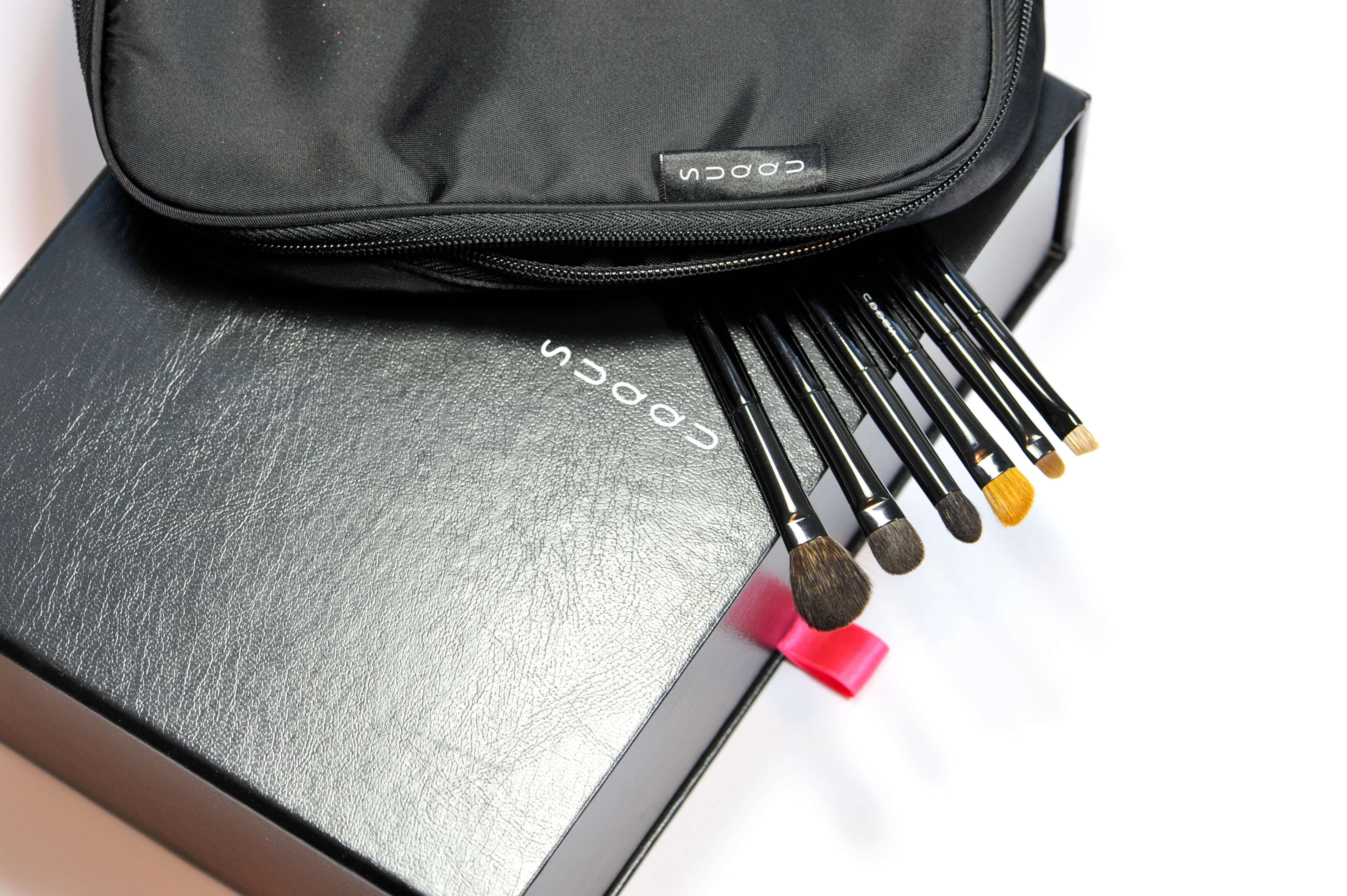 Suqqu released 2 Limited Edition brush sets to commemorate their 10th UK Anniversary, you can read all the information on this link. I already had quite a few Suqqu brushes but I thought buying the small set made sense since I would be getting a few items that I didn’t have, plus a backup of some brushes I was really using and abusing. Backup? Not really.

After so many years, the batches of hair will differ, the artisans who made them may too, hand shaping a brush does not result in the same surgical precision as a machine made brush, it’s normal and expect each brush to be very slightly different. On the other hand, I knew that I would not regret the set because that wee tiny difference between the same brush would actually be thrilling to see, too many variables for the same brush to end up being exactly the same, however, I expect that difference to go in the right direction and make the brushes even better.

This set costs 223 GBP, it comes in a big black cardboard box and contains 6 brushes plus a brush pouch. If we consider that a typical Suqqu eyeshadow brush is around 48GBP and the liner/brow brushes approx 25 GBP, the only difference buying a set is that you get the pouch as Gift with Purchase. Then of course there are some brushes you can only get in this set, this extra reason could be what pushes you to get it, even if you don’t need it.

I put labels on my brushes so that I don’t mix them with my old ones, I wouldn’t anyway because they are very different, but I tend to waste time looking for the names of the brushes, some names make sense, others are difficult to remember. 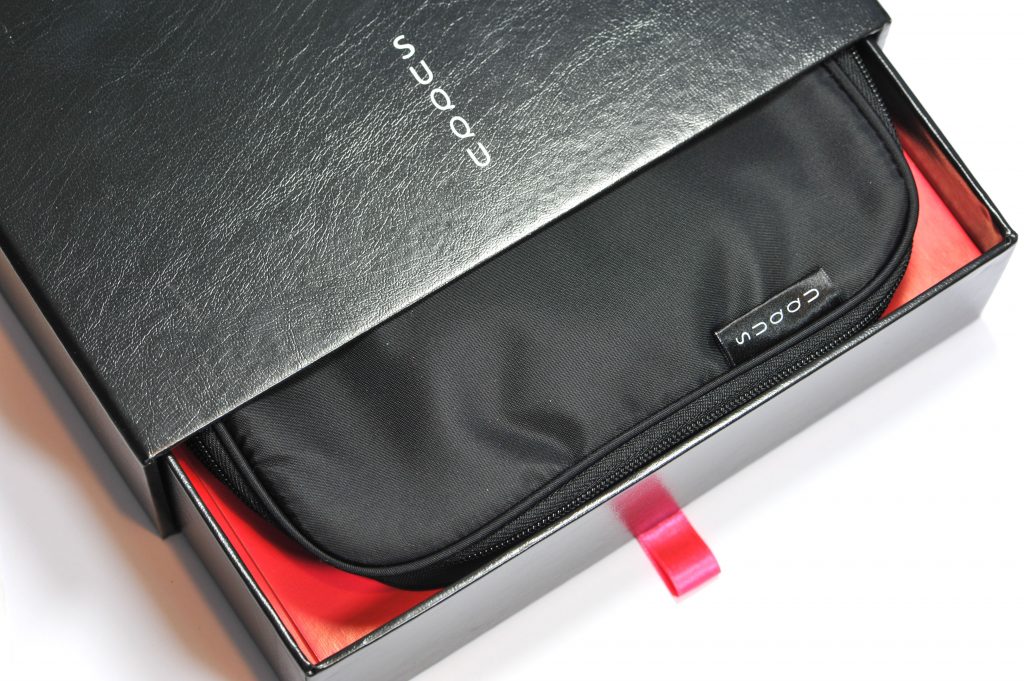 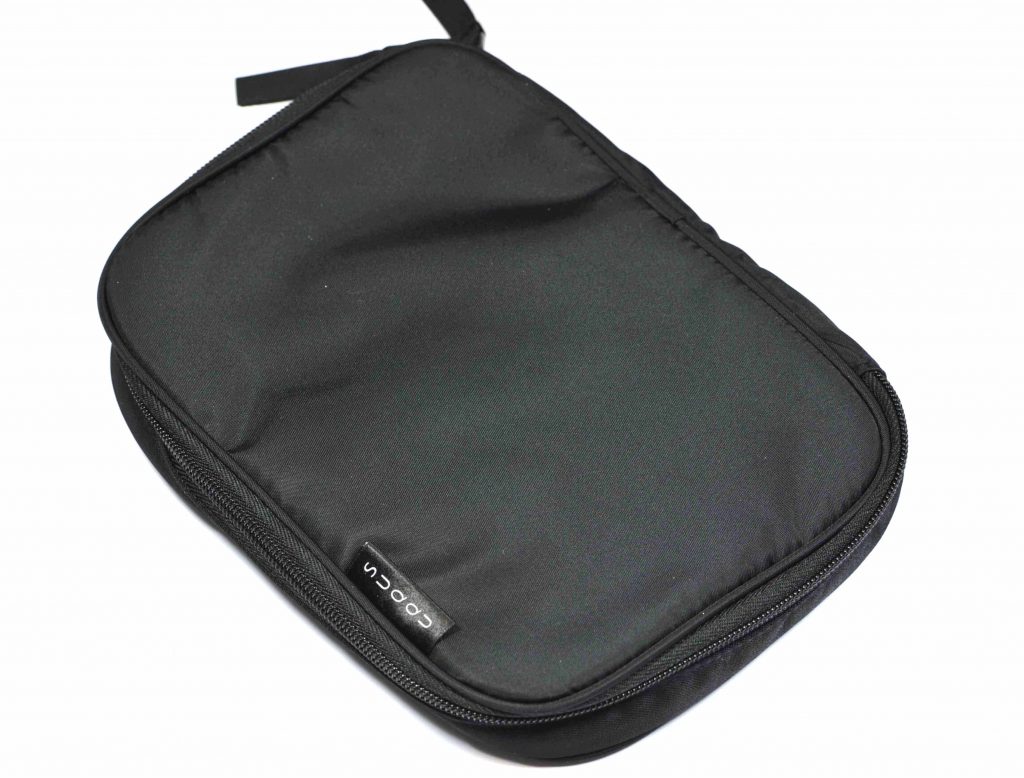 The pouch is nothing extraordinary but nice to have, specially with the SUQQU logo if you are a true Suqqu fan. 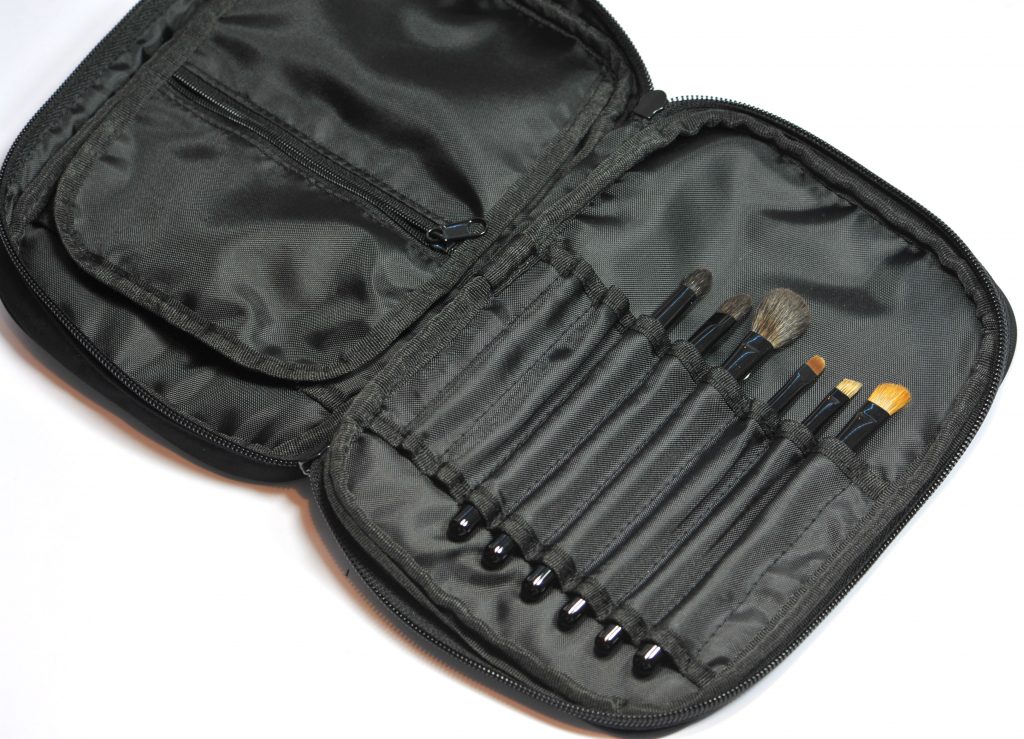 There is an insert that separates both compartments and protects the bristles. 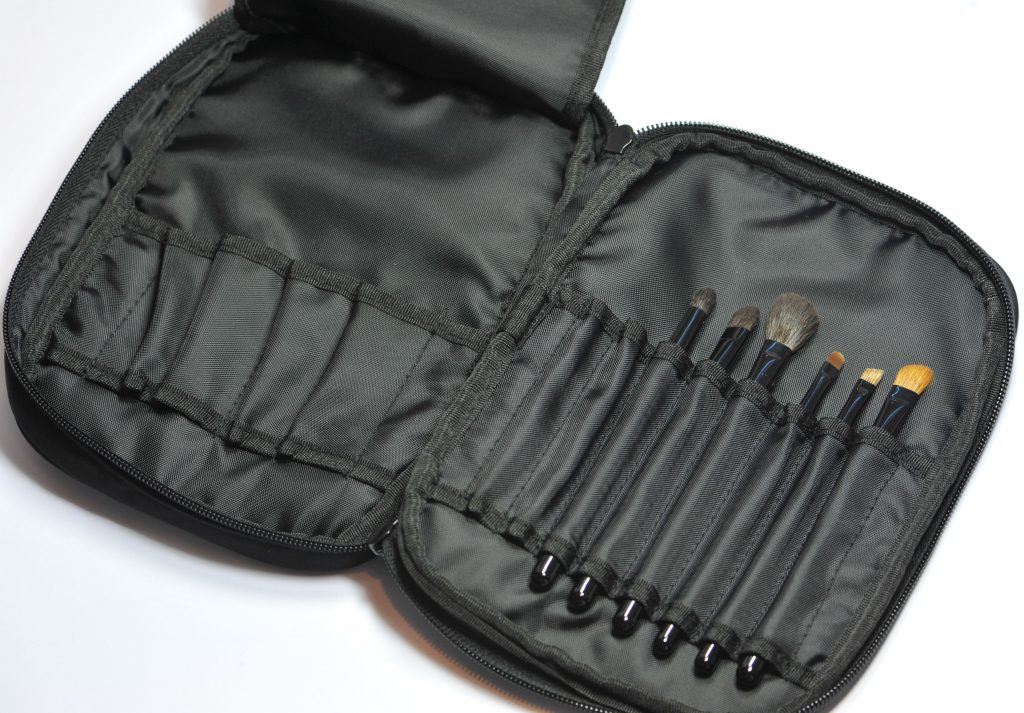 And here are the brushes I owned on the left versus the new brushes from the 10th Anniversary set: 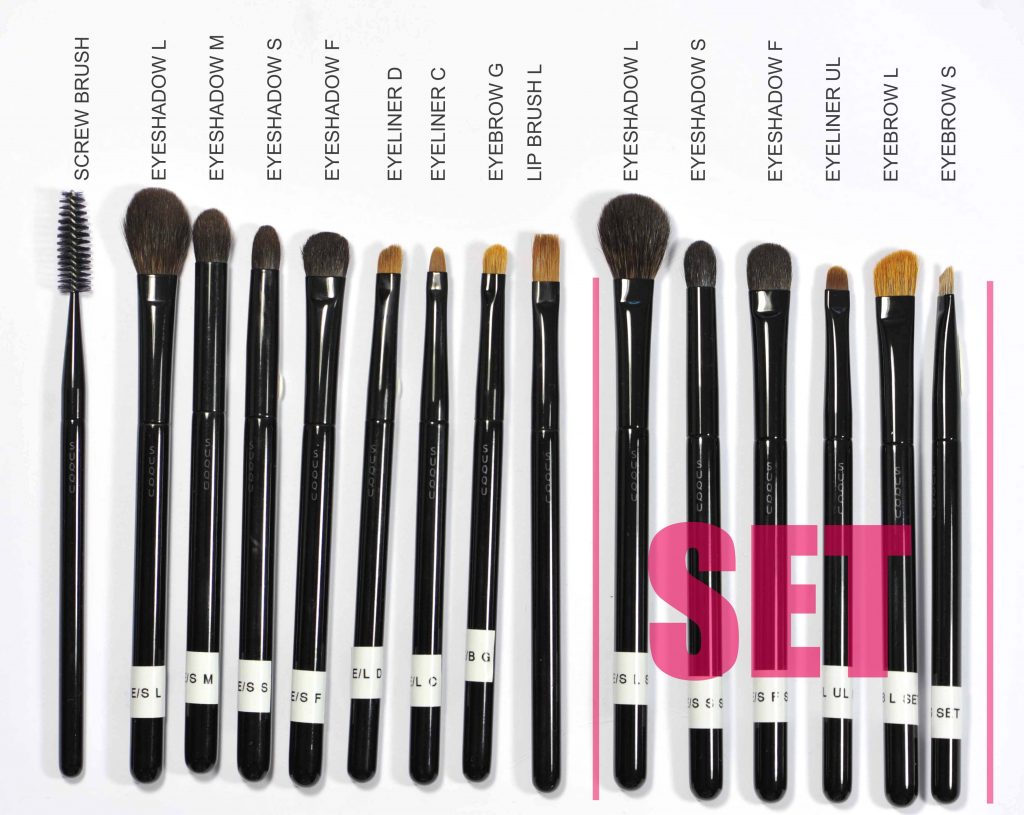 Three of these set brushes were new to me, the eyeliner UL, eyebrow L and eyebrow S. I am tempted to say that the eyeshadow L and the S are also kinda new to me since they are so different to the ones I had.

The Suqqu L is so much thicker and fluffier, I just adore it! I did not use my old Suqqu L a lot because I couldn’t do much with it, not a great blender, not a great placement. The new one is a more appealing brush and could have many uses, powder setting and even blender, the bristles are just as soft but it’s much more dense and the surface is not floppy. 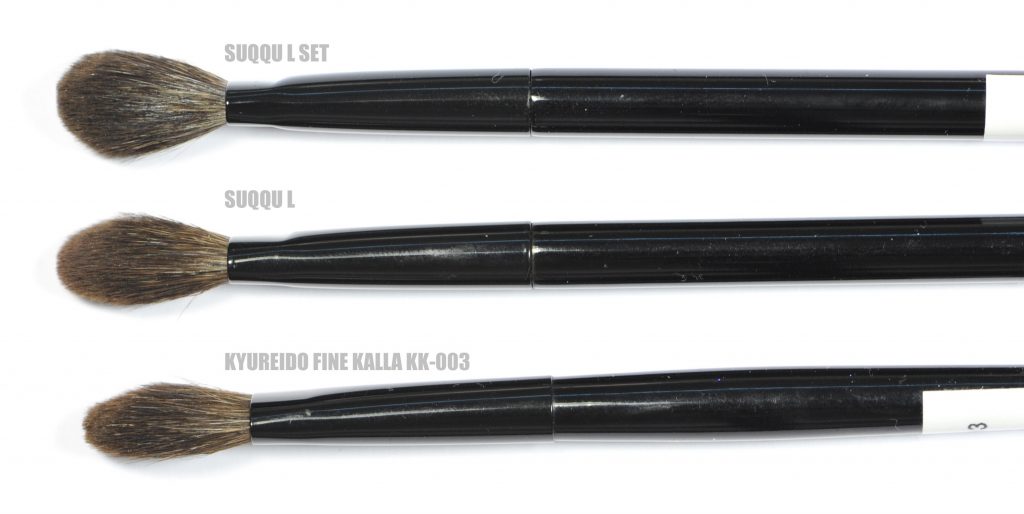 The Suqqu S is just not pointy enough for me, it’s ok for smudging the mobile lid but for the bottom lid it results a bit too wide, still works very well for some looks so it’s not a waste at all, but I believe that most of us are awaiting a brush with a point that is just as dense and SOFT, but much more tapered.

The Suqqu F is just the same brush, it’s obviously easier to bundle and repeat a flat brush. 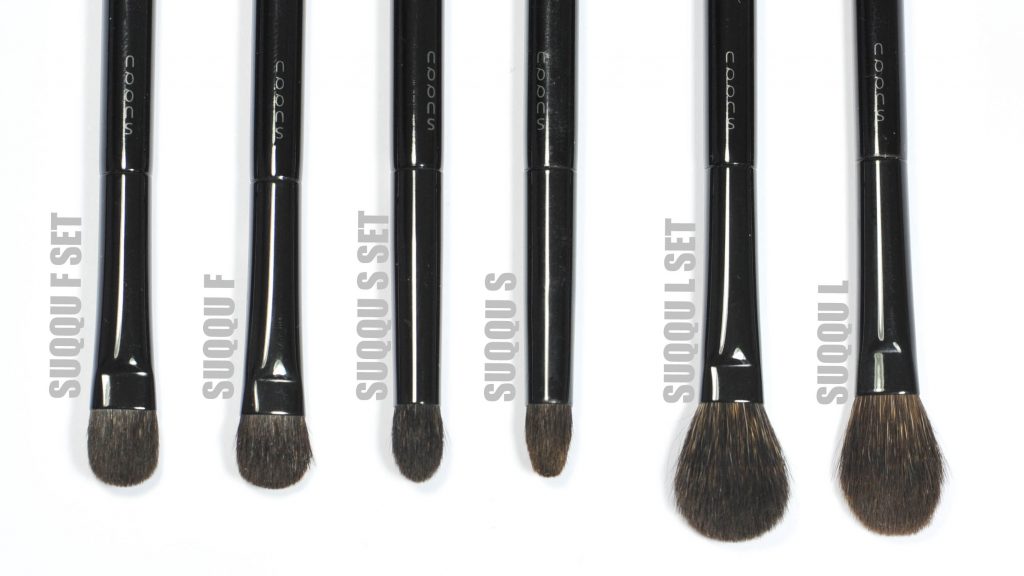 It’s not that the S is not nicely done, it’s a true gem but instead of looking like an S, it’s too close to the M in terms of shape and size. The Kyureido KK-004 (the top one) which is an M is very close in shape and size. 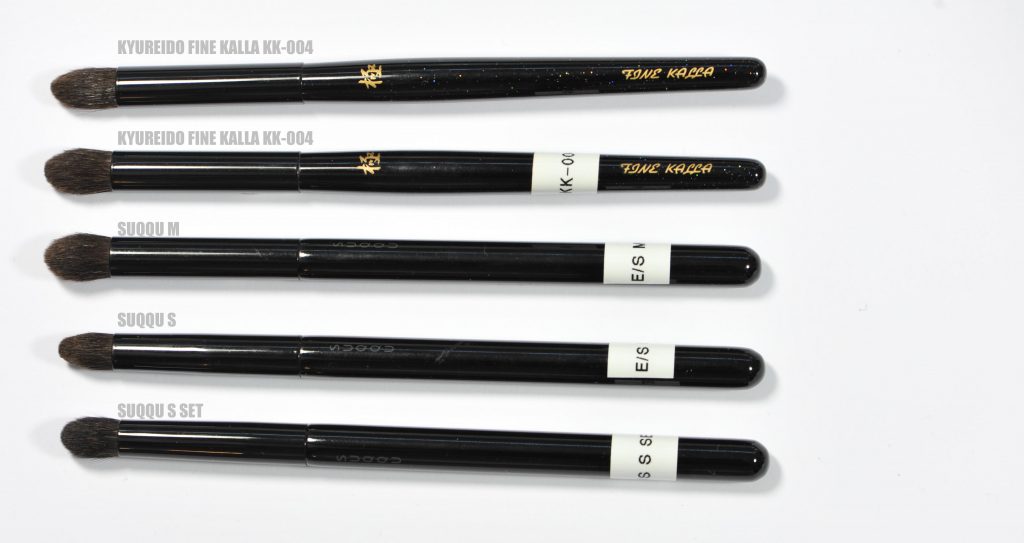 If you are wondering who is making the Suqqu brushes, it’s a bit confusing, I understood some are made by Chikuhodo, then I heard some also by Kyureido, then some bigger ones are bundled by other artisans. So I cannot tell you for sure today which Suqqu brush came from which manufacture as I don’t want to offend any of them.

A big hit for me is the new eyebrow L brush, I had the Hokuto Ho-Gentei 4 and this one was my fav of all times, this Suqqu is her twin. When you have thick brows and you just want to fill them fast and easy, this is simply the best tool. I could use the eyebrow G for the frame or the tail and then fill with the L, but I can just do everything with the L, saves time.

If you got the set or sets, please share your thoughts!

HAVING A BRUSH DAY!

I’m going to drown my American sorrows by looking at your beautiful photos and your post, Sonia!
I was also bummed that the e/s S is so round. Funny also that in comparison to your old M, my M is very pointy and something other people have mentioned to me! I think the variability of hand-made brushes is so important to call out because from one batch to another (and one artisan to another), many little details can change! I was happy to hear that the brushes will be made individually, but I also splurged on this little set! I’m very happy with it. L is one of my most favorite brushes, too (the old and this new). I love it for putting down sheer washes and also for light blending.

Oh Belly, I hope all goes well for your country, sincerely do!
Can we still hope that those who love it pointy can get satisfaction in the future releases? Maybe, maybe not, it’s a great brush although it’s more rounded than expected… let’s see… like you I love this big L! what a gem! for anything really!

I am waiting for the DHL delivery. Hope I get it today. Bought it from Harrods via email exchange with Suqqu rep. I could not get the red set eye shadow collection, because Selfridge would not sell it overseas. So I am still mad at Suqqu for that. I look forward to the eye set you have, mainly for the S brush. Now I hear that in months ahead, the S brush will be sold separately. I will compare my L brush like you when I get the set.

Hi Stacey, did you get your set? how did you like it? I hope this S will be sold separately very soon so all who are interested can get it!

On IG Suqqu had mentioned they will release the S individually next year.

It is a shame this ‘new’ S isn’t the same pointy shape as the ‘old’ S, but as you said, variability is hand in hand when products are handmade. 🙁

thank you PJ, yes I read that, a few more months and they should sell it again!
Maybe now they changed the shape on purpose, sometimes they do, I would love to have a chat with the makers 🙂

Hi Sonia, I didn’t get the set as I already had purchased some backups. My two M brushes are vastly different, the old one is very pointy and the new one round — they don’t look like the same brush to me. On the other hand my old L is fuller and rounder, which I like, while the new one is quite tapered. The Fs are a bit different; the oldest is flatter and more flexible than the other two. Also, my old cheek brush is full while my new one is thin and floppy.

I sometimes get backups of brushes I love and have duplicates of some Hakuhodo, Houkodou, Koyudo and Koyomo brushes. With only 2 or 3 to compare, it’s hard to tell how consistent a brand is, especially over time. When Yojiya staff let me choose over a lot of about a dozen cheek brushes in Japan, I noted quite a high shape variability. If the hair quality is very good, I don’t tend to mind. It’s only when I get an occasional dud like the Shu kolinsky 12 which was square and pokey that it really upsets me — I thought I was safe because I purchased it in Japan at a Shu counter but that was no guarantee. All in all, I guess that is life!

Thanks for breaking it all down for us again, I love how thorough and complete your brush reviews always are!

I got my brushes today. The S brush is definitely a domed brush and not a tapered one. So is the M brush. Both soft and well made but I’m disappointed they don’t have that point.

I just needed the eyebrow and eyeliner brushes from Suqqu and they are such a hassle to order (even from Harrods) either never in Stock or whatever. Unfortunately the shape is unique and other brands like Surratt or Chikuhodo does not make them this way…

Do you accidentally know which fibers the Suqqu Diagonal Eyeliner brush is made of? Many thanks and keep up the great work. I am always looking for your reviews when I have to decide which brushes to get <3 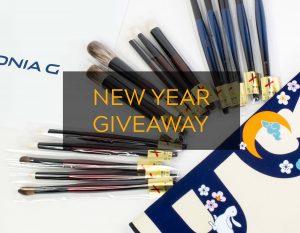 Just a quick update on what's going on while I try

Here is the Michele Wang oversized wrap in the sh

This little beauty launched and is available on Be

Hi!!⛄🤗 I hope you are having a lovely holiday

Hi!! 🤗🤗🤗 Some restocks have arrived at

Thank you so much, so very much, for your interest

The past year has been surreal and a challenge for

Your comments about these handles were so amazing,

"To the Moon and Back" microfiber towel ✨🌙

A little something new is coming and it's a little

Helloo!! 🤗 Once again, a huge thank you to the

Playing with Meteorites today as I was inspired by

Thank you Sheryl for all the beautiful shots of th