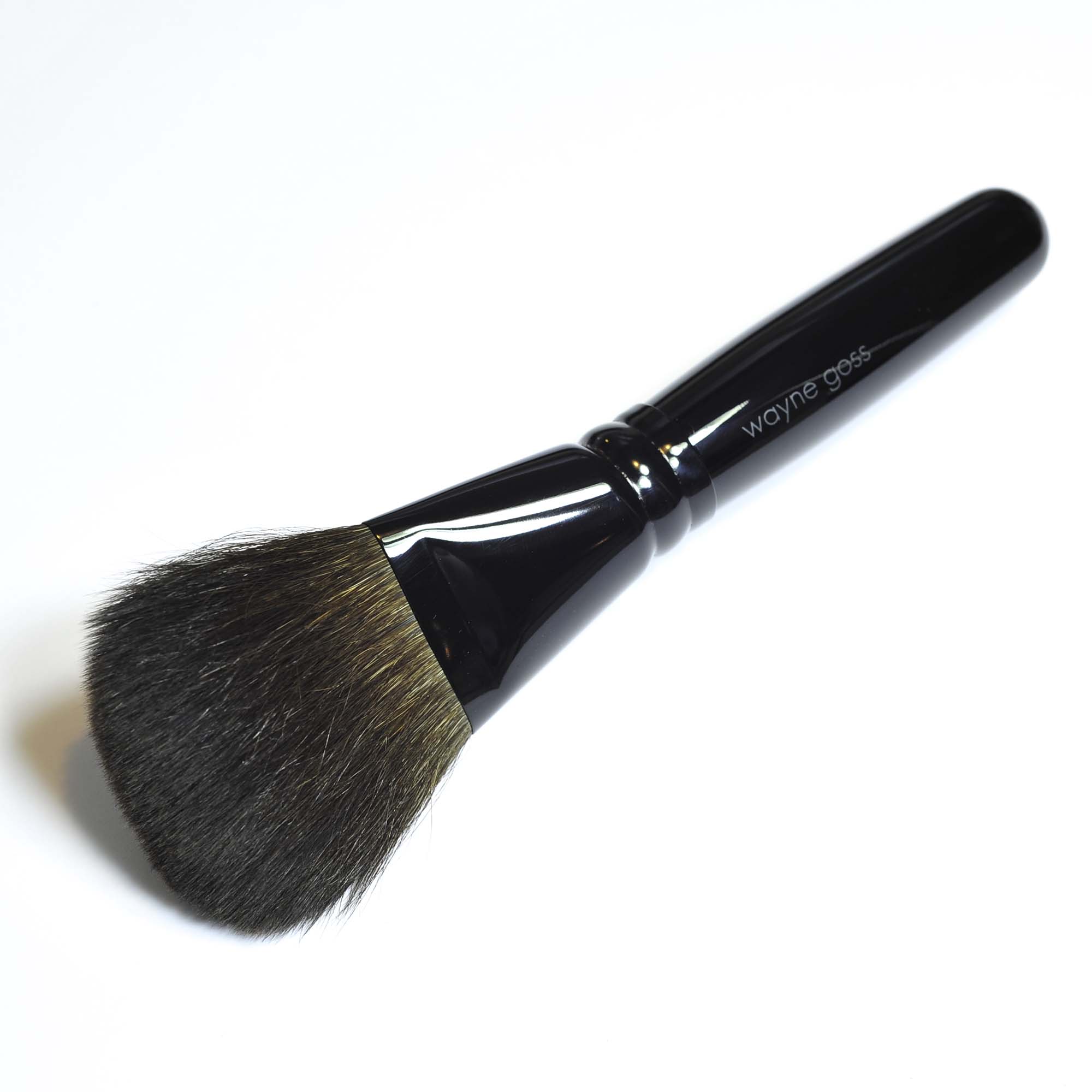 This is the new Limited Edition Holiday 2015 brush just released by Wayne Goss, available on Beautylish website. It’s a “finishing brush”, finishing brushes are used to blend or to set your make-up with powder, very lightly, firmness and density is not usually their strength and it shouldn’t be. In general they are soft, airy, big, they should not slap amounts of powder onto your face but instead offer a lightweight placement and a blending without disturbing anything you have underneath.

They often awaken the artisan side of us, by the way we hold them and manipulate them they make us smile and we somehow look inspired and talented, a bit like an artist completing a painting, they have that power on me while playing with this final ritual and relaxing steps before coming back to reality and chaos and I don’t mind how long this process take, time could just freeze there for a while. It costs 115usd, it is made with squirrel bristles and a synthetic weave (“weave”, that’s a new word now in my vocabulary). What this means is that to increase resilience and firmness the artisans add some synthetic bristles in the mix. It is very soft, if you are familiar with Hakuhodo grey/blue squirrel brushes or Chikuhodo’s, it is similar type of softness. If you want to go even softer with natural bristles it is possible, you will have to get either Saibikoho goat or red squirrel brushes but they are also way more expensive and released in very Limited Editions. Two years ago I was in Hiroshima browsing for brushes, sometimes in the big malls you can find gorgeous little gems, I bought this Tauhaus finishing brush, extremely expensive (twice the price of WG) extremely soft too but in comparison to the WG, this Tauhaus is too flimsy and just to be used with setting powder, actually I cannot even use it because the head disintegrates itself when I do. It sheds like crazy and non-stop. This one was so expensive and such a fail! I had left Japan when I realized how bad it was so I could not do anything to change it. It is the most similar brush I have to the WG Holiday but in comparison the quality of the WG is so much better and since it’s more firm and dense it also becomes more versatile.

So far I had absolutely no issues with the WG and I have used it many times already, compared to similar paddle finishing brushes that I have seen during my trips this one seems more firm and thick at the surface, Christine from Temptalia  describes it as “light-to-moderate in density. It isn’t a flimsy brush, but it isn’t dense either“, that’s exactly my thoughts. For me it got better with time and usage, I love it more today than the first day I used it. Use this brush to blend away harsh lines and set makeup without disturbing it.

Well, if the lines are really harsh you may need something stronger to really blend them away but I had to test it, I applied a red intense blush with a small brush, on one cheek I used the Wayne Goss to blend, what it did is that it kept the intensity of the red but the edges were more blended, still defined but more natural. Then I used the Rae Morris Radiance to blend the other cheek, the difference is that the Rae Morris diffused the blush in a more wider zone and toned down the color from red to a more pinkish color. The great news is that the WG had kept the blush in the zone where I had put it and with the hot nice shade of red. I was surprised with the result, it blends more than I thought it would and the original shade was unaltered, it requires more work than a goat brush but it’s softer and less abrasive. I have just reviewed the Surratt Holiday brush in the previous post and actually I have the exact same thoughts about this Wayne Goss: The Hakuhodo Kokutan LAG is goat and synthetic and costs 98$, the Hakuhodo S100 is just goat and costs 100$, they are meant to cover the same purpose but both Hakuhodo brushes splay out more and they are not as soft. There is one brush from Hakuhodo that is like my Tauhaus and the Wayne Goss, the Kokutan L (also squirrel and synthetic), it costs 120$ but I don’t own it so I can’t say how similar it could be. I have had my Hakuhodo finishing brushes for years so they look a bit old and used today, but since I discovered this WG and given that I prefer it, I see myself reaching for the WG instead.

This brush sample has been sent to me by Beautylish.

Beautylish Year of the Tiger

I bought this brush immediately but am not sure whether or not I’ll use it regularly. It’s a bit too soft to use with my Guerlain Meteorites which is what I would usually use a finishing brush for. But it’s beautifully soft, well made and a pleasure to handle.

I have no problems with the Pearls at all.

At first, I was wondering if I would use it often as I don’t usually go for this finishing type of brush, now I am so happy to have it! sometimes I am happy to discover that a brush can actually really impress me and change my mind, oh and I forgot to say but I LOVE this handle, so big and heavy, finally 😀
I hope you will use it often and that you will enjoy it too!

I am completely lusting after this brush. Mainly because I know how soft and silky it will be (I have his holiday 2015 brush and the #13) and I have a thing for huge brushes. Love my Tom Ford body bronzer brush. Really, though, I have no need for this brush to justify my purchase, but that doesn’t stop it calling to me: “CC, buy me… I’m so soft… like nuzzling a bunny…”

I use this for Hourglass Ambient Powders. It’s perfect for finishing powders.

I know this post is old, but I am considering getting the Kokutan L as a dupe. Truly, I’m looking for something to apply my Hourglass Ambient Lighting Powders with. Would you suggest something like this, or do you feel another brush works better? I’m interested in hearing your thoughts. Thank you!

Hi Tammy,
I have been using this Wayne brush with them (it is actually quite similar to the Kokutan L), I love how it places the product without altering the underneath layer and without too defined edges to the application, it is actually shaped like a fan, just the ferrule is not a fan-type of ferrule but the shape of the brush totally acts like a fan.
I pat the product with its side and don’t polish or blend so if you are not going for an entire face type of application but just for the cheekbones this is absolutely amazing. For the entire face I would use a finishing brush that is more rounded.
I hope the Kokutan is just as efficient because I did not had the chance to touch it, on the pics it looks similar…:)
How do you apply the Ambient powder and which ones do you have ?
xoxo

Thanks for your reply. I actually haven’t even received my Ambient Lighting Powders yet, though I ordered travel sizes of the diffused light, radiance light, and mood light. I currently use Charlotte Tilbury’s Airbrush Flawless Finish Powder or MAC’s Mineralize Skin Finish. I wanted something to give me more of a natural glow and was hoping the Ambient powders might be the answer. Since Hourglass makes a fan brush specifically for these powders, I figured something in a similar shape would be ideal, but I am very open to suggestions. I have a few high-end brushes, but wasn’t sure if any would be great for a WHOLE face application as I want to achieve an even application.

Some brushes I currently own are:
– Suqqu Cheek Brush
– Chikuhodo Z4
– Wayne Goss 00
– Rae Morris 22 Pro Powder
– Wayne Goss 13 (I use this for buffing with some of the above finishing powders occasionally)
– Rae Morris Ultimate Cheekbone
– Wayne Goss Air Brush

I obviously could wait to try the powders out with any of the above brushes, but I believe the Rae Morris 22 might be too loosely packed to allow for a noticeable application; the WG 00 is too scratchy to use over my entire face (typically use for bronzer); I usually use the Z-4 for my current finishing powders (I have a small face), but I think it’s too small and dense to allow for an even application of something potentially “glowy” (I have a heavy hand). And it just seems like a good excuse to try a new brush since I don’t really have a dedicated finishing brush 🙂 I so appreciate your input!