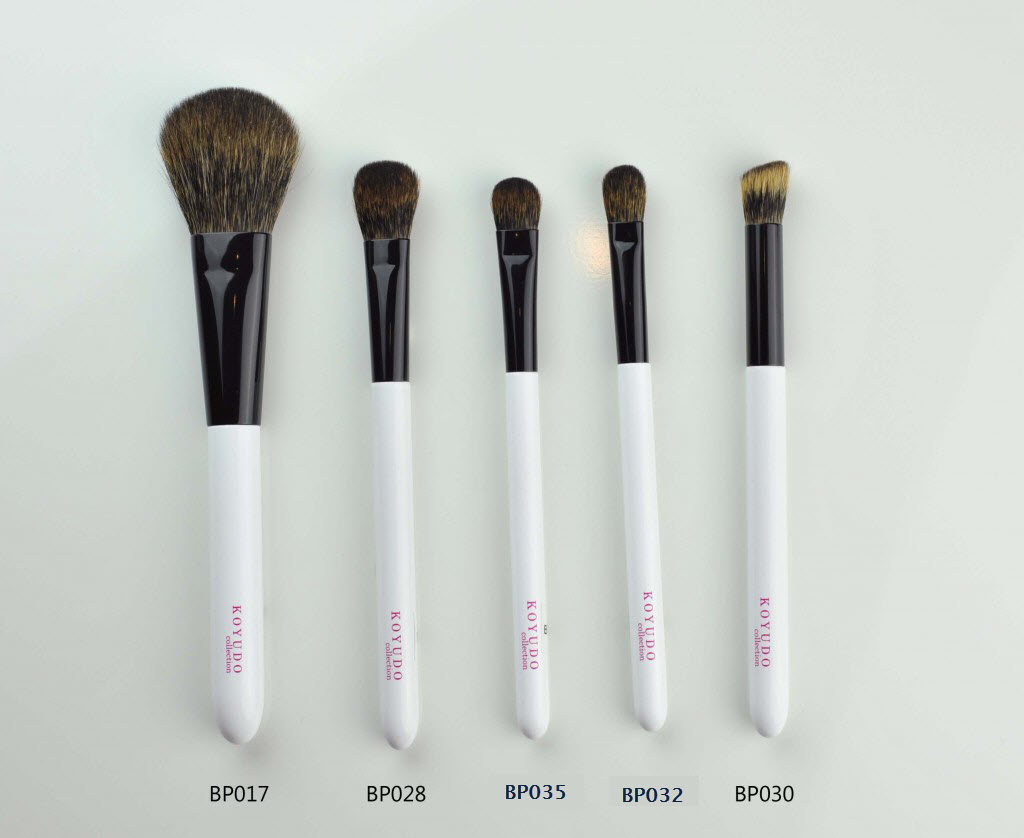 Funny that this review comes just after the kolinsky one… I told you in the previous post that Koyudo had opened a door to new possibilities and that now I am tempted to try the others… Having a blog is the best excuse ever!

The first one I had from these pine series is the BP030, since it had exceeded my expectations today I can share some comments about the 4 other ones on its left. I bet you are scared to read what I really have to say about them and not sure if you really truly deeply should … In the past years I have gathered just a few brushes with pine squirrel hair – I have never been that interested – but now I finally have some to show you in comparison.

Let me just briefly summarize, in terms of quality of material, Koyudo is the best. The others are really good too -some even excellent- but Koyudo bundling is just simply better, and the hair is softer, fluffier.

These two are both pine squirrel, more resilient (durable) than grey or blue squirrel brushes. None of them poke at all, but I can notice a tiny difference in the hair quality, I wouldn’t say one is better than the other but for example the BP017 looks like it has used expensive Philip B shampoo (I’ll mention Philip in a future post by the way, preparing the intro here..) and the other one l’Oreal which is not bad but not exceptional to the touch.  To the touch the BP017 is smoother but the Chikuhodo might be more efficient when it comes to blending because it’s a bit more rough (without being harsh at all).

The Chikuhodo appears thicker and denser but I think this is because Koyudo’s has slightly finer hair, it’s missleading, the difference is really not that obvious. The Koyudo has a little bit more flexibility due to that difference but it is still dense enough. Sideways the surface of the BP017 allows more precision and you could use it in wider or more narrow zones (contour or hightlight). Another HUGE eyeshadow brush,  or highlight, or precision sculpting… What is different about this one is its shape. It’s thick, dense, fluffy and soft and even though it’s a bit tapered sideways there is a generous surface that offers nice blending capabilities. I love this brush so much, the layers start at approx the middle of the head so I find that it picks a generous amount of product and delivers a soft natural application with pleasant delicate blending. If you want more blending power and a huge brush, go for the GSN-07 but if you want something softer the BP is the one to go for. You won’t get precision here, just keep that in mind.

The only complaint I have is that it’s a bit too big to be exactly comparable to the Mac 239 but other than that, I would say it replaces my Mac 239 most of the time just because it’s softer and fluffier. I noticed that the application was a bit more fool-proof, I don’t sleep much recently due to what I will be releasing for you this Christmas so in the morning I don’t see very clearly when I am applying my makeup, I don’t want to spend time buffing away an excess application and I don’t want to insist with the layering either.  I wish they could do the same brush with same density as this BP032 but just a bit smaller. The density factor is its big strength, other similar pine brushes are much thinner than this one.

It’s a placement/crease/blending brush very multipurpose, another little gem…  Very similar in shape to other oval brushes, it’s just slightly thicker and fluffier but firm enough to be extremely controllable.

When I apply eyeshadow in the crease I place it in a way that the color in the surface of the brush is just applied to the higher part of the crease without going further down onto the mobile lid when doing the windshield wiper movement, with a round crease brush you will have the product in the crease and all around it, most of the times this is what you want but if not that could be a useful tip. In my opinion these brushes are meant to work with pigmented products, softly and naturally, the feeling is something in between goat and grey squirrel brushes, it’s a good compromise for those of you who cannot use goat and who cannot get enough pigmentation with grey squirrel hair brush. I am really surprised with the quality, the shapes, and I am glad they don’t have more because I would probably be ordering them too… pheww!

And now for something even softer… Koyudo...

Thank you for that lovely post! I’ve never been attracted to the look of pine squirrel (it makes me think the brush is dirty!!!) but it does feel incredible and works efficiently…. I hope all is going well with you, Sonia 🙂

same for me but I think Koyudo and Takeda do a great job with these bristles. I still prefer grey squirrel for blush if I had to choose but for eyeshadow I find these more efficient.
Yes all is doing great thank you Bonnie, and I hope you too! I need to write to you with some tips for Japan 🙂

Thanks for these, always appreciated …*mauh* 🙂

Love that you include brush motion description again!

If only I see these posts yesterdy before going to the Koyudo counter…I saw the only pine squirrel brush on display (BP017) but I didn’t study hard enough for squirrel hair except blue/ gray one. So I just thought, “this feel so soft but I don’t know how durable it is,” I needed an expert yesterday. :p

Thank’s for your posts, i really like the blog and all your articles were useful. i have learnt many things thank you! please take a look here http://blog.sina.com.cn/s/blog_6b47ee6501018v81.html this person stole your article and copied everything i found it by chance.

Thank yo Asmaa, when I will have some more time I will check into that.
I have been asked by a girl recently if she could translate my posts because she said I was popular in China and they would love that, I don’t know if it’s the same person 🙂

Love my S122 and S133 too!! It picks the colors so very well! I do prefer these and my Shu for lay down than the J serie I have. My favo for blending e/s is squirrel.
The S122 keeps shedding though so I’ve been verrrry careful with her.

Dont like pine for blush application. It appears patchy and totally NOT even out on my cheeks 🙁

shame for the S122 🙁
pine is fine for me, I guess my technique with them is weird but works (I look like a dog scratching his ears 😀 )

Hi! Just came across your blog. Wow…you do an AMAZING job reviewing brushes. I want some better precision and smaller crease brushes for my aging eyes. Where can I get these brushes?

Hi Elyse, If you click on the title in green these are links to the seller.
CDjapan and Koyudo sells them.
http://cooljapannow.jp/shop.html/17
http://www.koyudo.co.jp/

Thank you for the post Sonia! I read a lot on your blog. I orderd the Koyudo BP035 en the Mascara brush C017P cuz i don’t have one already. Now i need t wait realy long hihi. Can’t wait to have the brushes and to try them out. The BP035 is my first Pine brush. And i think my last squirrel brush.. Wish they had this one with goat hair to.

So sorry that I couldn’t reply to you in time…

oh no, so sorry Nynke, I really apologize for the mistake! They really should write the number of the brushes on the handles, they don’t imagine how much work we have to put into all the labeling 🙁 and of course, mistakes can happen, so sorry again!
I wanted to reply to you before but it’s quite difficult at this time, the weather conditions here are terrible and I had a little car accident that is causing some pain in my neck and spending time in front of my computer is restricted to the very minimum 🙁
thank you again for informing me and please let me know if I can do anything to help..

Hi Sonia, its ok. Atleast i had a good excuse to order another brush. Its indeed realy confusing that they don’t put labels on the brushes.

Sorry to hear you’ve had a accident. Get well soon!!

So sorry again 🙁 gosh I hate that. I hope I can compensate somehow..
I will get well soon thank you! <3

Its realy ok! It was a bit my own mistake to. I was reading your post en the first thing i did was order the brush becauce your revieuw was so good! I just need that brush 🙂 En then i looked to the other brushes en find out that you maby switched the numbers.

Can’t wait to try them out. Can we use brushes with pine squirrel hair with cream products to? Like a paintpot? Or is goat hair better for cream products? My eyes (en skin) are sooo sensitive lately. I need a softer brush for finishing powder to. My J110 dont feel nice anymore. Hope my skin is not to long so sensitive like this. He is always sensitive, but not like this.

Hi Nynke, no, really I am sorry … 🙁
look here http://www.hakuhodousa.com/?itemid=10&catid=3 there is the explanation but let me ask them and make sure… I don’t think they are but I want to double check.
Goat hair is definitely better for paintpots, ok, allow me a few days and I will insert a category for you in my upcoming database – a Hall for cream products is missing so thanks for the idea 😉 , I will send you the link on Christmas day and you will see what options I use for cream products, it’s public so everyone will see as well.
my skin changes.. sometimes it gets very sensitive, others it gets better, that’s why when I can I use goat brushes and when it’s more difficult I use squirrel… 🙂

Did you get a chance to change the comparison pictures of the BP035 and BP032 with the other brushes also?

I ordered the BP035 and then realized that it was listed as the BP032 in the two other pictures…actually worked out because that is the one I wanted anyway.

I think the brush temple has the picture of the BP032 but is listed as the BP035 also.
Hope this is not being annoying as hell, but I don’t want anyone to get grumpy if they order the wrong brush. LOL

I am excited to try all the new Koyudo brushes I ordered (feels like agony waiting for them, lol), but I can only imagine they will be amazing quality if they are anything like the Red Squirrel and Fu-Pa14….

Hi Myra, I will update all that tonight when I get home!
Thank you again! <3

Sonia, how is your experience ordering from CDJapan? I have just placed an order last week and have not received any follow up emails advising of order status and shipping updates–you know, the usual online shopping protocols. Since then I have seen a good number of complaints from other people ordering from Koyudo via CDJapan. Do you have some tips to share about this? Your blog is the ultimate brush bible! Thanks for sharing your wealth of knowledge =)