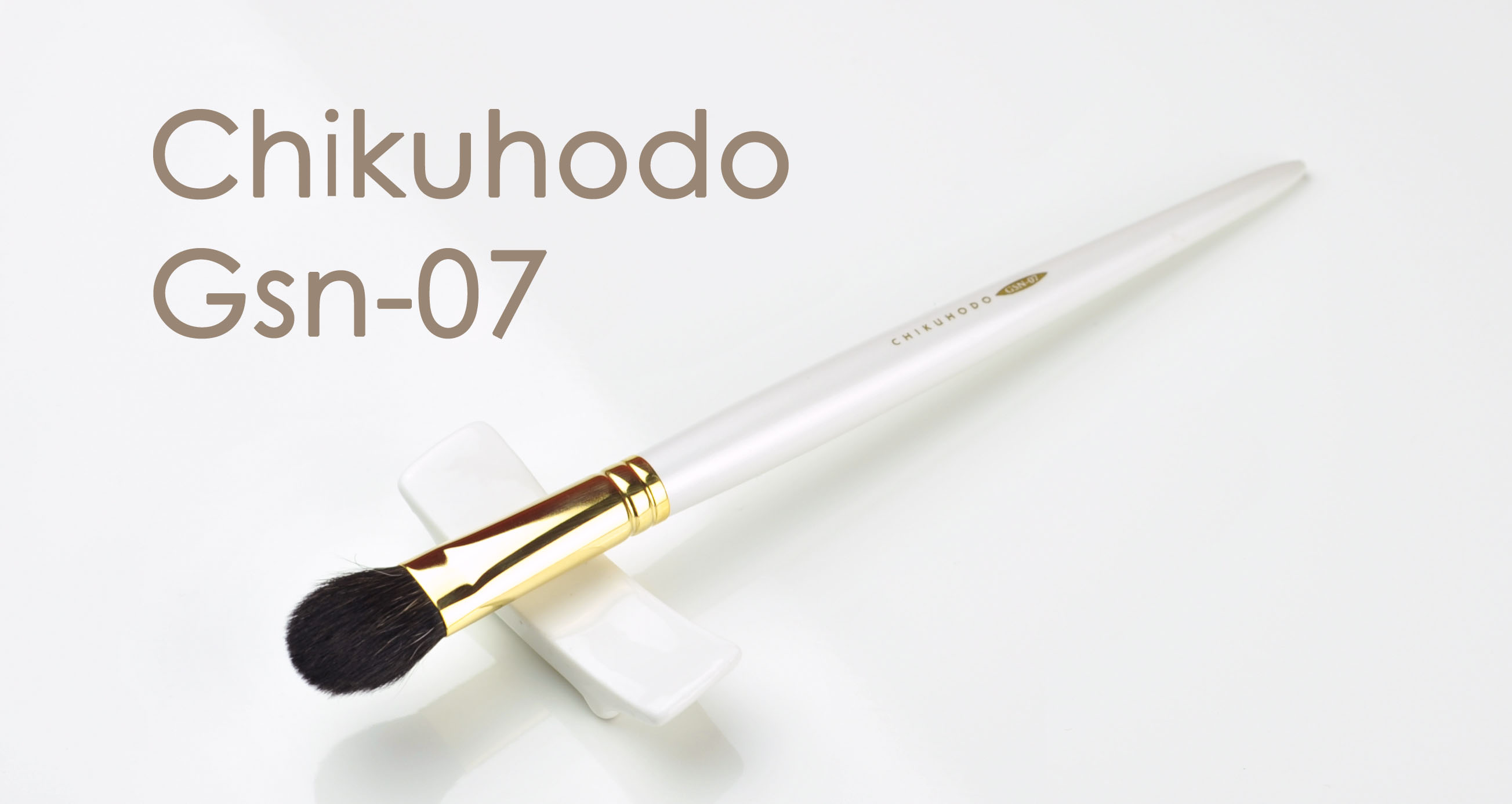 There are some brushes that I just can’t resolve to buy (yet), like the Chikuhodo Kiwami set, or the Shu Uemura 15, if one day you see their price you’ll know why.

While I was researching for a dupe for the famous Shu 15, I came across some brushes that were huge eyeshadow brushes indeed but that did not had the fullness or firmness that could really get me dupe-satisfaction.

Some time ago I saw the release of this GSN-07, Yutaro from Chikuhodo told me it was sable and squirrel hair (I own sable/squirrel brushes that aren’t soft enough so that did not really tempt me), he also said that it was bigger than the Special G-3. At first I did not wanted this brush, then I wanted it, then I didn’t want it anymore… I was confused. I knew my friend Buggsiebee had it and I asked her for advice, she was kind enough to even send me pics and I was immediately convinced that I had to get it, so THANK YOU  Buggsie for your precious help!! Before I go into more details, I have to mention that this brush made me think of my friend Dena, Dena has big eyes and she is crazy about huge eyeshadow brushes. Just a quick message for Dena because I know she will read this at some point : this brush has your name all over it!!!

At first I was relieved that it was different from the G-3, then I wondered, what will I be able to realistically do with it ?? I thought it would be too big for eyeshadow. Well it appears it’s not too big for me, I can apply an all-over shadow because it’s firm enough and still quite directional and controllable, this morning I even used it for both the whole area and the lid (up to the crease). I can use the tip of the brush flat or at an angle against my lid area in order to blend or I can use it to lay down the color.  For sure it’s HUGE, but if you want the biggest eyeshadow brush, this is as good as it gets.

I thought the sable bristles would reduce the softness of the brush, it does, but not in a bad way, it still is soft enough and the sable adds the firmness that I love, also the fullness that you don’t see often in eyeshadow brushes.

You can also use it to pat and gently push powder and set your concealer application, it doesn’t poke at all but I mostly use it for eyeshadow application and blending.

This picture will give you an idea of its size, for some of you the Shu 12 is already too big so this GSN-07 will certainly not be the best investment.

The G-3 (squirrel) is the most flexible of the bunch but still directional and tapered. Then the 12-6 (squirrel) is a bit firmer (but not much), both these brushes have similar softness, similar shape.

The Shu 12 is much more firm and since it’s kolinsky/sable, it can be used with cream and liquid products. I won’t be able to completely replace my lemming for the Shu Uemura 15 but now I can live without missing it too much. You can use cream and liquids with the Shu 15 and this, you won’t be able to do with the GSN-07 but since my original idea was to use the Shu 15 with powder anyway, this GSN-07 will absolutely do the dupe job quite perfectly well and for a more affordable price.

I know these new GSN series have now arrived at Kohlindo.se so if you are interested you’ll have to contact them directly since they still don’t show in their website 🙂

Face One and Soft Cheek restock 2021

Oh i’m so glad you reviewed this brush. it’s been on my wishlist, but i was wondering if would really be something i would reach for often ^_^ and now,i think i’ll have to get it

it really depends on your usual makeup routine and if it’s too big it may not fit the “eyeshadow” brush purpose. I will definitely continue to reach for it regularly because of its efficiency and fast application of a single shadow look!

I’m so excited to get a mention – thanks, Sonia! I have to get this brush – I DO love my huge eyeshadow brushes 😉 How does it compare to the Paula Dorf eye blender/the Bobbi Brown eye blender/ the Trish McEvoy 48? Is it that sort of size or larger? It looks smaller than the Suqqu L eyeshadow brush.

Hi Dena!! Compared to the BB and the Trish, it’s same width, but it has softer and longer hair, same width sideways but it has more density, more fully packed and more pleasant to use.
Compared to the Suqqu, approx same length but Suqqu much more flexible and floppy. I don’t have the PD anymore.
I’ll take a pic of these later on today 🙂

Thank you so much – it was so sweet of you to take extra photos. I do need that brush!!

Not my type of brush … but I understand that there are lemmings which you don’t want to buy because they are too expensive but it will be for ever in your mind how it would be…
I think I don’t really lemming the Kiwami set anymore after I’ve seen the koyudo maki set for 1600€ (The big brush looks awesome) but when I think that I can get a new laptop for this price…. And I would pay almost 400€ Vat and tax o_O

yes the taxes.. omg, this is really scary, that’s also why I don’t even want to order this kind of expensive products 🙁 these sets are very tempting though but I really don’t think I will get them and taxes is also the reason.

Your reviews are nothing short of remarkable.
And the brushes, oh the brushes…
*Drools*
Noone does it better than you Sonia, noone!

I can’t believe that I’m loving this brush so much. When it first arrived, I was…. ‘HELLLLOO???…..you want to be an eye shadow brush???” It looked & felt much more like a highlighter brush. The feel of it was sooo good though. The mix of squirrel & weasel allows it to be soft & firm at the same time & I like the desity too.
Anyway, after I decided to just give it a try on eye makeup ,I haven’t stopped using it since. I use it to lay down & blend in the crease. My Shu # 10 & 12 brushes are more versatile due to the fine tip which allows more precise application, but the GSN 07 is most definitely a workhorse & a TOTAL keeper!!

Thank you for the review as always – you’re always so personable, but also very efficient and objective 🙂

I don’t really use large eyeshadow brushes, and I tend to gravitate more towards the Shu 10, or Takeda 11 (in between Shu 10 and 12, and thinner, less dense). But the gray squirrel and sable combo sounds very tempting hmmm….

SHU UEMURA’s brushes are made by “Mizuho Brush Company” in Hiroshima, Japan. (I cannot find any information to proof that, but according to the stockist of Mizuho brushes in Hong Kong, Mizuho is the supplier of SHU UEMURA brushes) The stockist in HK is a makeup school whose owner write blogposts (unfortunately its in chinese), thats why I came across it.
I just dig in some search on the brushes with Kolinsky (Mizuho website has english version, however its online store is in japanese). Mizuho website has listed the types of hair they are using (Kolinsky in japanese is コリンスキー) that I can search whether they have any individual brushes that available to sell in online store. Turns out they only have a set of the best brushes available with Kolinsky (and only 2 of them are in Kolinsky: Link here: http://mizuhobrush-shop.com/shop/shopdetail.html?brandcode=013000000011&search=%8E%BA%8E%D8%8E%DD%8E%BD%8E%B7%8E%B0&sort=)

And I know a few buyers that lives in Japan that help people ordering japanese goods and send overseas (They got Facebook page so you can add them, I have no relationship with them and I am just one of their customers: I just placed an order of hakuhodo brushes with their help and get one of them engraved). They accept Paypal and they know english (I guess, cause they are from Hong Kong and got married with a japanese husband)

[…] you know that when a self-described brushpeologist like Sonia over at the Sweet Makeup Temptations blog is resistant to buying a brush, it’s got to be really, really super […]

Wow, a brush complementing and somehow doing the job of a Shu 15, this is a true complement!

My impression on Chikuhodo is brought up to a whole new level, positively.

Chikuhodo are really playing in the very efficient brush field at the moment, can’t go wrong in terms of how well they work.

I need to lay my hands on these as like you I cant justify the price of Shu 15 either! I am so broke. lol.
Thanks for reviewing this 🙂

My Japanese sister-in-law helped me buy the Shu 15 in Japan @Takashimaya. It’s worth the cost of obtaining this brush. It’s only after I obtained a dupe for Shu 15 that I used both extensively, alternating between washes. The dupe is 12E01 from Makeupshow (I bought this in China). Their bristles and bristle head sizes are similar, hence similar outcome in terms of performance. I prefer Shu’s handle, ferrule and overall workmanship. But the 12E01 costs 165 RMB whereas Shu 15 costs me approximately 400 SGD (can’t remember clearly). Shu 15 is particularly suited to me because I have lots of spaces between my eye and the eyebrow. It’s very efficient. Would I buy the Shu 15 had I find the dupe first? The answer is a resounding YES! Because this is a must have

oooooooh really ??? have to look at this asap!

Hey,Sonia!Hope you’re doing great!
I had missed quite a lot of posts the last time I visited and, obviously, had a lot of catching up to do… :/ Anyway,I love everything,but the brush care post especially was my favorite! Ever since,I’ve been looking for a comb similar to the one your have for your brushes,but can’t find one anywhere for the life of me!I seem to have spotted such items in your “behind-the-scenes” brush manufacturing posts.Hope your comb isn’t from a factory or something,cause that will make it easy peasy to find! 😛 Anyway,do you think you could share where you’ve got yours from?
Thanks a bunch anyway,all the best! xxx

Anna, I am doing much better thank you 🙂
I bought it here when I was over… http://www.kumanofude.com/index.html
but I cannot find it online.
I also asked CDJapan but they don’t sell it.
Maybe the easiest thing is to ask someone like Tommy http://bringblingjp.blogspot.ch/ if she knows if they could send it to her.
I have been looking for it but just could not find any 🙁 if I do, I let you know, will try to write to my contacts in Japan.

Hi I’m new to your website and I’m very interested in the Chikuhodo brushes. Do you know if now-eproject.com is a legitimate seller of Chikuhodo brushes? I live in the states so I don’t think kohlindo.se ships here.

Hi Kat, I think Kohlindo do ship to the USA, I see an “outside EU” so maybe they do.
Either way, Now-Eproject also are legitimate, I didn’t order there myself but I know of friends who did and had no worries 🙂

Hi Kat 🙂
we ship to USA. No problem 🙂 We ship all over the world.
You are welcome with your order or if you have any questions please send an e-mail to: anncharlotte@kohlindo.se